On view until 8 October 2016, Dauwens & Beernaert presents a solo exhibition of the Italian conceptual artist Marco De Sanctis (Italy, b. 1983; MFA Beaux-Arts Brussels). The exhibition lends its title, ‘To Share’ , from the exhibition's centre piece: an engraved Belgian blue stone featuring a detail of a mannerist 17th century engraving by Hendrick Goltzius. Marco De Sanctis created a unique sculpture, based on a detail of the 17th century multiple, the engraving (which was on its turn a copy of  an original painting). Visitors are invited to put a sheet of paper on the acid-engraved Belgian Blue stone, and to make their own copy of the engraved stone (and therefore indirectly also of the engraving). The second work in the exhibition space ‘Richomme d’après Ingres - Henri IV et ses enfants’ is also based on an existing engraving. As in many of his works, Marco De Sanctis challenges the duality between the original and the copy and also here, he bridges the gap between different epochs of European (art) history, with an act of restauration and an act of poetic and careful destruction. The engraving (which is integrated in the work) was printed in 1835 by Joseph Théodore Richomme. The engraving depicts Henri IV playing with his three children, in the presence of the Spanish ambassador and Queen Marie de Medici. The partly restored engraving was made after a painting by the French painter Jean Auguste Dominique Ingres, painted in 1817. Ingres was on his turn inspired and strongly influenced by Raphael. The composition of Ingres painting was for example inspired by Raphael’s painting, Madonna del Prato (1506). Marco De Sanctis then carefully copied the pattern of the tapestry depicted on Richomme’s engraving, on Japanese paper and attached his original drawing vertically on the border of the engraving, in that way making an original three-dimensional contemporary work. Finally he sealed and connected the above mentioned reference works (Raphael’s composition, on Richomme’s copy of Ingres work) with his original addition (the ink drawing), to that all works are physically but also mentally connected. 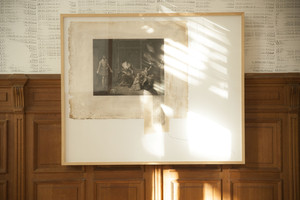 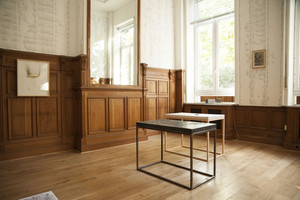 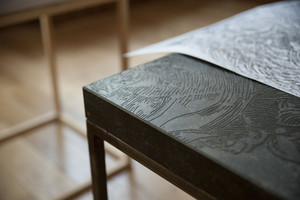